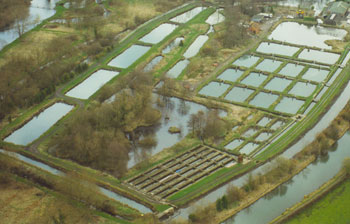 Berkshire Trout Farm has specialised in providing high quality Brown and Rainbow Trout for the re-stocking of Rivers, Lakes and Reservoirs since the turn of the last century.

Success in consistently providing hard fighting quality fish to the sporting market has earned the farm an enviable reputation and a loyal customer base.

Berkshire Trout Farm has its origins over a hundred years ago back in the 1880's when the first owner ran a successful trout farm on the River Chess in Hertfordshire. With the need to expand and develop his operation he looked for a new location, and ultimately discovered the current site of Berkshire Trout Farm in 1880.

Digging out the stock ponds started in 1900 and it took 200 labourers over four years to dig out the original 50 ponds. A hatchery was established at the site in 1904 and the new farm finally opened for business in 1907 and has traded continuously ever since then.

Today the farm has over 60 ponds covering 15 acres, making it reportedly the largest re-stocking trout farm in the country. Under the stewardship of the current owner for the last 27 years, the Farm supplies Brown and Rainbow trout to the re-stocking market both in the UK and abroad and the business is one of the top producers in the country in numbers of re-stocking fish grown.